Is #Golf Becoming an Impolite Game?

When I watched golf on television for the first time as a youngster, I happened upon two players whom I later found out to be Nicklaus and Palmer - later on I was to learn the significance of "Shell's Wonderful World of Golf".

I felt like I was a part of their game; the cameraderie, the etiquette displayed, all made me wonder if women also played this sport. If so, I was going to get in on the action one day.

But, being from The Bronx, I also didn't know of any golf courses in my immediate vicinity (now I know better - there are, of course), just the concrete jungle. I continued watching, studying the actions of the players, the handshaking, the comments which always complimented another member in the foursome and wondered if other sports had the same standards.

“The real test of good manners is to be able to put up with bad manners pleasantly.”


Politeness, etiquette, even dressing for the event were all "givens" about thirty years ago but it looks as if some folks believe that this part of the game serves less of a purpose if golf is to survive, and thrive, in our "modern" times. Are we taking one step forward to move two steps back?

What is golf etiquette anyway? Well, in my opinion, it's more than just having manners and it's more than just an unwritten set of rules - it's the way the game should be played. Arnold Palmer's tips in Golf Digest include keeping your temper under control and being a silent partner.

Here are basic fundamentals of golf etiquette published by PGA.com. 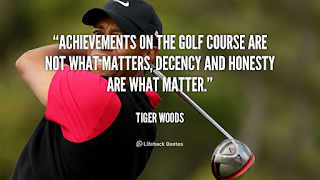 Let's also add to our list of etiquette "do's"; keeping pace with the group ahead of yours and not cursing out loud on the course.

We have all seen slow play on the PGA Tour - from Kevin Na to Ben Crane and fans have all witnessed foul language after an unpleasant shot...(think Tiger Woods during The Masters) and even spitting on the green (Tiger Woods in Dubai) but the problem with seeing this type of behavior from the pros means it has the ability to trickle right down into the local publinks and to impressionable children watching the sport with the family on a Sunday afternoon.

If the PGA Tour pros are going to be seen erring in etiquette, does that mean that it's okay for the average hacker to go ahead and do it? Should golfers have to pass an etiquette test or should we lessen the rules to get more people into the game?

As etiquette is an integral part of the game, and, just as in playing the game itself, you have to call infractions upon yourself. If you find yourself cursing, or if you're going to step on a fellow golfer's putting line, it is up to you to stop for a moment and think about common courtesy whether you play nine holes of golf or eighteen, or whether you play on a par-3 or an executive course.

Golf is a sport, a game and a heritage all wrapped up in one. Making changes now will certainly impact the future - looking back fifty years, I hope fans continue to see the humility and civility of the game.

Voice your opinion on Twitter @Golf4Beginners and on this golf blog.

We need everyone in the golf industry to speak out about this. I am all about having fun, but the idiots screaming on the course during tournaments, the loud foul language - if you want to swear that is fine, but keep the volume down so only your foursome can hear it, to music playing from carts. If you need music that bad go to a concert it doesn't belong on the course.

Glad you posted this.

Thanks Todd - we're moving forward yet taking two steps back as I said in the blog. Think headphones would help for the music but, unfortunately, people have to call infractions on themselves. That's just not going to happen.

Golf courses could help by posting a list of basic etiquette although I'm not sure how many people would read it...perhaps if it were created like an infographic of pictures?

I don't know how to play golf but it looks so interesting and amazing.