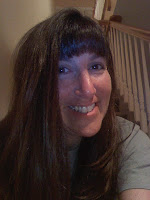 Stacy Solomon has been a student of the game of golf since 2000 and blogger for "Golf for Beginners, because we're always learning" since 2004. She has written hundreds of articles and blogs for well-known internet websites such as Worldgolf.com, AT&T and IBM and her work has been reprinted on thousands of sports websites.

Golf for Beginners started out as a way for me to keep my lessons in a format where anyone could see them and benefit from them. The website has grown to include PGA Tour and LPGA Tour commentary, equipment news and reviews of travel destinations. I am very proud to consider Golf for Beginners a worldwide blog, realizing that golf is growing on a global level!

An amateur golfer, my handicap stands at about a sixteen which drops as the year progresses and as my short game improves! As I always say, "the game is played from 100 yards and in!"

Although I began my writing career in 2004 working for various online media outlets, in 2006, I was asked to join the Worldgolf.com golf blogger team. In addition to a weekly column on their site which reached out to over 2.5 million golfers per month, my husband and I also produced the popular five-year long Golf for Beginners Podcast, a regular top-ten on iTunes amateur sports listings. We earned kudos as a pioneer of podcasting by several newspapers including New Jersey Jewish News, "Couple Uses Media Technology to Teach golf to beginners" and The Working Musician. Portions of the Golf for Beginners podcasts have been reproduced on radio stations as far-reaching as South Africa!

I am very proud that I have helped to make Golf for Beginners so recognizable: my blogs can found re-posted in the NY Daily News Sports Section online and in South Florida Golf Magazine. My editorial selections can be accessed via Riversip News app.

Golf Channel has scrolled my tweets on TV in order to highlight their 2012 U.S. Open rebroadcast, I have partnered with corporations as an "Influencer" for IBM in order to bring awareness to their vision of Smarter Commerce and with AT&T to introduce their latest smartphones as well as to bring visibility to the Pebble Beach National Pro-Am.

I am proud to have worked with Legends Invitational Golf Event to bring awareness and support to the National Navy UDT SEAL Museum, a patriotic and worthwhile charity which educates, enlightens and helps families of fallen SEALs - I am very honored to have been of service.

I have been invited as a guest on several radio shows such as AOL Sports Radio, the GolfClubRadio Show with Danielle Tucker and the Enlightened Golfer Radio Show. Ms. Tucker has mentioned that Golf for Beginners offers "positive and constructive feedback plus great blogs and insight." My most recent radio appearance was as a guest on the On Par Radio Show with Anthony Scorcia.

Inciteful and instructive interviews have been conducted through email, podcasts and Twitter with some of the best-known golfers and thinkers in the industry including Hank Haney, John Daly, Morgan Pressel Jim Furyk and former PGA President Brian Whitcomb.


Golf4Beginners has taken flight on Twitter and, because of the thousands of friends I have made there, was recently asked to reveal some of my expert secrets in the premier issue of 914 Inc. Magazine.

I had initially chosen to keep Golf for Beginners on Facebook for personal communications but now, since many of my golf fans are friends, I publicized it to my many friends in the social media arena. Within six months of going public, I now have about 3,000 golf-loving friends and have just begun a Facebook page for Golf for Beginners so that all fans have a voice!

Dennis Allen, a twenty-five year golf industry veteran and Executive Vice President of the new Back9 Network stated, "she cares about the game of golf and is insightful. She has lots of ideas percolating in her head that she willingly shares."

Probably not even realized by many in the industry is that, because of both my husband Barry Solomon's and my continued fight for the rights of new media talent to be considered as knowledgeable and respected writers, we helped set the stage for bloggers to gain media credentials at professional golf events such as the 2010 Sybase Match Play Championship and the Puerto Rico Open.

My career has been as varied as a Party Planner for Billboard Magazine to Circulation Sales Director with magazines at Fairchild Publications. I accepted a volunteer position on the Steering Committee for The Club Cup, an inaugural social media event designed to help grow the game of golf among the masses with the assistance of PGA and LPGA Tour players. For the past several years, I have committed myself fully to internet media as a Digital Content, Search Engine Optimization and Social Media Manager.

An honor graduate of the Bronx High School of Science, I chose to remain in my hometown attending New York University on a full four-year scholarship. I love new technology and to be able to explain and engage others with my passion. Combining my love of tech with golf has been a long-term goal for me.

Several years ago, I became a member of the Metropolitan Golf Writers Association and am very proud to be one of the few females in the group as well as one of the only golf writers exclusively serving the online community.

I have always promoted causes that are near and dear to my heart and will never compromise on my resolve to be the best person I can be. The message in golf is a good one and I live by the rules of the First Tee Program; be honest, have integrity, confidence, and respect, play by the rules, and persevere despite challenges!
Posted by Stacy Solomon at 5/21/2010 04:01:00 PM

Great bio! I especially like the "rules of the First Tee Program."

On a different note, would it be possible to get our site (http://www.gimmegolfdiscount.com) linked on your site? We would greatly appreciate it. Have a great day!

I am thoroughly convinced in this said post. I am currently searching for ways in which I could enhance my knowledge in this said topic you have posted here. It does help me a lot knowing that you have shared this information here freely.
Optishot

I hope you don't mind me contacting you directly, but I was just wondering whether you were currently accepting guest posts on your blog?

I am an experienced freelance writer, who holds a real interest in providing valuable information and advice based around travel, family and sport and I'd love to write an article for you.

I had several article ideas in mind, including:
- Romantic summer getaways
- Golfing holidays in the Algarve

Would any of these be of interest to you?

If so, please let me know and I'll get an article over to you in the next day or so for your approval.

I look forward to hearing from you soon.

I've always been looking for a way to improve my putting in golf. I saw this product and it's helped my game immensely. You might want to try it yourself:
http://annestone.com/golf-gift/

Hi Stacy,
I was reading through your blog, and I thought I might reach out to you both to congratulate you on the cool blog, and to see if you'd be interested in writing about a new app potentially hitting the market this year.


The App is called NoteCaddie, and it's designed to simplify and organize the process of taking notes out on the golf course. All the pros take notes of every course they play, and it struck us as a huge surprise that there are very limited options out there for amateurs who want to do that. We found most people agree that they play better in courses they know better, and yet no one really takes notes when they play. So we set out to build a robust app that can do what other GPS apps on the market do (so players won't have to switch between apps) but simply and effectively allows you to take advantage of course knowledge as you accumulate it to drive your scores down.


The app is in the design stages still, and we are looking to fund its development through a kickstarter campaign. We are looking to build some buzz around the app and see what people like your readers might think and build awareness.


We would love to discuss partnering in a few different ways, including letting you get involved at the testing/prototype stage if we get that far. Let us know if you'd consider writing about the app, or us as founders of the company and our mission, or note taking in golf, etc.


Check out more info at www.notecaddie.comand feel free to reach out to me with any thoughts questions or insights you may have. I look forward to hearing from you and will continue to read your posts.

I was very inspired by your story and how you got started sharing your love for golf online. I recently started to do the same with my husband and although we are barely just getting started your story encouraged me that we are on the right path. We are just your every day golfer sharing how the mind impacts every part of golf and we love interacting with other golfers.

Hi, Stacy, so patriotic of you that you worked for the National Navy UDT SEAL Museum, great post.