Today was supposed to be an early start to Day One at the Puerto Rico Open but Mother Nature did not comply. Early rains and a very wet Trump International golf course delayed the resumption of Round One despite all efforts to make the course playable, including a helicopter to blow dry the fairways.


Instead I took an early morning swim in one of the largest pools I have ever seen at the Gran Melia. After un desayuno muy delicioso (it's amazing how you can learn Spanish so quickly here) at the Soleil Cafe, we wandered through the royal gardens, again waiting for word that play would continue but...no luck. 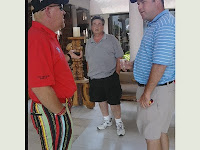 The waiting game is more frustrating for the golfers than for the press or even for the fans. While stretching our legs we came across John Daly who was heading over to Trump International Golf Course. Jonathan Margolies was standing at the front desk with us but not to practice as he unfortunately missed the cut this week.
On the tram over to Trump GC, Chris DiMarco mentioned that he was "bored" and when Barry asked does this happen often DeMarco replied, "this year there have been a lot of weather delays. It's just something you have to get used to." 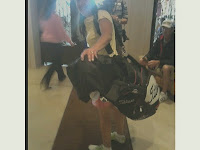 Vance Veazey's caddie, John, was offering me tips on the mental game of golf. I was curious as to how heavy Vance's bag is and John said, "give it a try", so I did and found out that almost sixty pounds of dead weight is too much to carry for eighteen holes. I give John, and all caddies, a lot of credit!
Crossing our fingers, the golfers should get out by 4:35 pm. Even so, with only about two hours of sunlight left for the day, I don't think that anyone will complete Round One of the Puerto Rico Open today without the help of a flashlight!
Posted by Stacy Solomon at 3/12/2010 04:06:00 PM