Golf fans desperately searching for the next Tiger Woods, here he is - Jordan Spieth! Or is he...?

While one of the greatest golfers to have ever played the game is now ruminating that the 'sun is setting on his career', the other, Spieth, is eagerly contemplating his future.

At twenty-two years old, Spieth is not only a multi-millionaire, but he's also already a record breaker, earning more than Tiger Woods in one season. Jordan has now regained the title of number-one golfer in the world, he's won two majors in one season (The Masters and the U.S. Open) and almost clinched the remaining major tournaments. He is also the youngest golfer to win five events in one season. 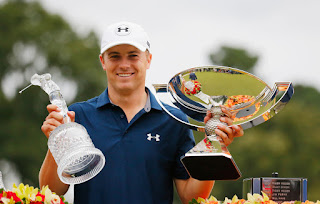 But, is Jordan Spieth ever going to topple the legacy of the former World's Number One?

There are so many Tiger Woods devotees on social media that, after reading through some of the comments on the "Golf Nothing More" group to which I post, I have to say that it will take a major shift in mindset as much as very hard work from the young Spieth to change the hearts and minds of fans.

The question on the group page was, "Is Spieth a Better Golfer at Twenty-Two than Tiger Woods?"

Comments included:
David White, "Tiger never missed any cuts." which speaks to Woods' incredible golf ability at such a young age.
Steve Wesson, "Tiger changed the game - Spieth plays it. I love them both but I would take a young Woods over Spieth."

Tiger Woods did change golf and introduced the game to a whole new era of people that wouldn't know a hybrid from a wood. He got kids involved in the game just by being so far above the rest that people tuned in just to see him perform...and he was GOOD...the BEST that had played in a very long time.

I would have to agree that, at twenty-two, Tiger Woods still had the upper hand versus the young Spieth but, at the rate of growth of the current World's Number One Golfer, does Spieth have a chance to, one day, have his name on the lips of golf fans as the one who surpassed Tiger Woods' records?

Looking forward to a new year, the next question might be, "How is Jordan Spieth going to top his award-winning season in 2016?"

Spieth would have to win, at the very least, the other two majors that he closed in on this past year - The British Open and the PGA Championship - in order to have the elusive Grand Slam in his back pocket. He would have to win several larger tournaments that include a top-name field and do it easily, as Tiger Woods usually did in pressure-cooker situations.

We cannot predict the future nor can we write Tiger Woods out of the history books yet, but, as Jim Nantz mentioned during coverage of the Masters, "Win or lose, you just got a good look at a young man who’s going to be a big part of the future of this sport".