Aside from being one of the most anticipated golf events of the year, the mix of sports and football legends as well as Navy SEAL maneuvers made the 24th Annual Legends Invitational one of the most unique happenings I have ever attended. Here is my take on the festivities and why you should mark your calendar for next year's celebration.

After flying from east to west coast, I arrived in sunny Monterey, California to meet the Navy SEALs and play golf at the Legends Invitational Event. The trip was long but, as I stepped onto the back porch of The Inn at Spanish Bay illuminated by blazing fire pits, I became mesmerized by a scene of calm and storm; peaceful flag-fluttering greens were accentuated by waves crashing from behind. Long first day with the prospect of the adventure to come.

Day two, standing on the porch having a cocktail at the Jack Daniels tent, I was awed as I watched a swarm of Navy SEALs parachuting onto the fairway of Spanish Bay Golf Links, gliding softly into three-point landings to the sounds of patriotic songs performed by The American Rogues.

It was a touching moment which made me realize how fortunate I am to be living in the greatest country in the world.

I had never seen demonstrations so realistic nor had I been in the immediate presence of so many Military in full gear – guns (not loaded) by their sides, GO Video cameras atop their helmets and canine SEAL-in-training MIKO ready for center stage – talk about up-close-and-personal, this was in-your-face cool.

SEALs warmly took the spotlight as cameras were flashing; Lauren Seaver, news anchor at KSBW-TV mentioned, "it was one of the coolest demonstrations I had ever seen" and that nothing like this had ever occurred before at Spanish Bay.


Nick Buoniconti, NFL Hall of Fame middle linebacker who played for the Boston Patriots and Miami Dolphins said, "I had chills. You get chills up and down your spine because you know, that, in real life, they're putting their lives on the line."

The Navy SEALs, heroes of Sea Air and Land, are special forces who go into situations of grave danger and provide reconnaissance - they are the ultimate warriors. Navy.com states that SEALs bring "a threatening act of sea piracy to resolution in the blink of an eye."

The National Navy UDT SEAL Museum is dedicated to preserving the history of SEALs (originally known as frog men), while honoring the fallen heroes and assisting the families of warriors who have perished in battle.

The Navy SEAL Museum receives no federal funding and relies solely on the patriotic support of our citizens which is why the Legends Invitational Golf Event has chosen The Navy SEAL Museum and these brave responders as the recipients of their support.

After a night of meet and greet with HOF Football Legends and Navy SEALs complete with delicious buffet prepared by the Spanish Bay Inn chefs, the next morning brought a few hours of respite before the official event start, so what did I choose to do?

Being a golfer and knowing you are going to play Pebble Beach the next day, thoughts arise such as, “I wonder if hole number 7 is as treacherous as I read” or “does the 18th hole really look that beautiful in person? The answers are yes to both questions.

Pebble Beach, Spyglass Hill and Spanish Bay, three of the most beautiful courses in the world, each have a natural, rugged beauty that cannot be justified through the lens of a camera.

If I could offer one tip that stands for all three of the golf courses mentioned above, whether you have played here before or not, it is to invest in a caddie. I thought my distances, reads on greens were close but I was off on almost every decision I would have made, so the caddie definitely saved my group and I a number of strokes.

Yes, I played golf with an ADMIRAL! While teams were captained by football and sports legends, other teams were led by Navy SEALs. In my opinion, our team hit the jackpot-the Admiral is an approachable leader and a true gentleman. 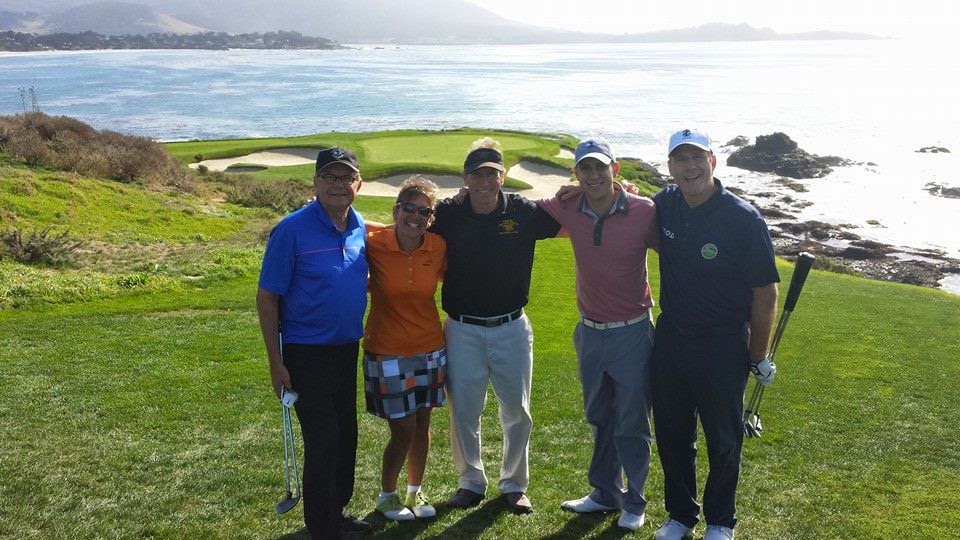 The additional three team members were a memorable group of excellent golfers. McNally is an Emmy Award winning videographer, Wayne Kostroski is the founder of Taste of the NFL whose annual Superbowl Party with a Purpose rallies the country's top chefs and the NFL's greatest players to raise money in support of food banks throughout the United States. Pete is his son and an awesome golfer (with a single-digit handicap).

As we got to the 7th hole at Pebble Beach, we were greeted by Jack Daniels crew and we toasted to good health and good fortune with Legends Invitational owner John Lee (who stood and watched our shots) …and then we proceeded to par the hole!

The rest of my Pebble Beach golf round was equally as spectacular as this 18-handicapper forged ahead to shoot a 94.

What could make this golf event even more memorable for me? Playing Spyglass Hill and Spanish Bay the following two days.

Legends Invitational title Sponsor, IZOD, created memorable gift bags including their outstanding golf apparel for all of the participants. A great deal of thanks for their devotion to the Event and for their support of The Navy SEAL Museum.

This is how to support the The National Navy UDT SEAL Museum.


More information on Legends invitational Golf Event and how you can attend next year's extravaganza.

Voice your thoughts on our Golf for Beginners blog and on Twitter: @Golf4Beginners, @NavySEALMuseum and Legends Invitational @SEALsGolf.
Posted by Stacy Solomon at 11/21/2014 10:00:00 AM