What Are The Best Golf Course Greens In 2013? Reader's Choice!

Although your choice of golf course can be as subjective as your choice of club, there are certain greens that top most people’s lists of the very finest in the world. Golf for Beginners, in association with Golfplan Insurance, takes a look at five courses everyone wanted to play in 2013 and who considers them to be the best of the best.

One of the very oldest courses in the world, The Old Course at St. Andrews has been pivotal to the development of the modern game, including the standardization of the 18-hole course.

The twenty-eight Open Championships that have been held at St. Andrews to date make it the most featured course of the competition currently playing host to the event every five years.

Known the world over for its iconic large double greens, this superb layout features seven greens that are shared by two holes. Most famously of all lies the Swilcan Bridge, which spans the 1st and 18th holes – everyone who has ever played the final hole has walked over this 700-year-old landmark. The Old Course features 112 bunkers, each individually named and with their own unique part to play in the course’s history. A true landmark of beauty and tradition on the golfing circuit.

Host of The British Open Championship no fewer than nine times (most recently in 2008) and most recently this year's choice for The Senior Open, Royal Birkdale is one of the finest courses the UK has to offer.

It’s richness of great golf holes provides an incredibly fair and enjoyable challenge for golfers of all abilities. The 12th, a 183-yard par-3, is as natural a hole as you are likely to come across in Britain. From a raised tee, you must avoid four deep bunkers before resting on a narrow green nestled at the foot of several sand dunes.

The longest hole on the golf course is found at the 15th, a par five that features more bunkers than any other hole on the course. The level of challenge the Royal Birkdale faces can heavily depend on the weather, with a windy climate providing many a torrid time on the enormous 18th - a heavily bunkered, 476 yard par four. A truly stimulating and challenging course. 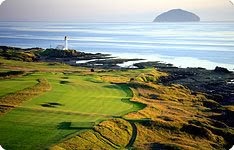 Probably most famously known for Tom Watson and Jack Nicklaus’ famous ‘Duel in the Sun’ at the 1977 Open Championship, the Ailsa Course at Turnberry is one of golf’s genuinely iconic courses.

Featuring a magnificent lighthouse which looks out over the sea, the green runs along the Firth of Clyde. The par-70, 7,217 course is one of golf’s legendary venues. The opening three holes provide a stiff opening challenge, particularly if the weather is against you.

The following seven holes provide a remarkable backdrop of coastal scenery alongside some very demanding play. Breathtaking scenery, a challenging, traditional course and an awe-inspiring history make the Ailsa Course one of the most popular golfing destinations in the world.


Augusta National, Georgia
Why voted No. 1? 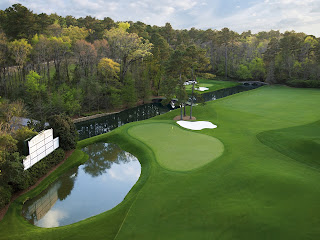 Host of the annual Masters Tournament since 1934, Augusta National is undoubtedly one of the most well-recognized and revered courses in the United States. Home of golf’s elite, Augusta is considered the masterpiece of the legendary Bobby Jones. Every hole on the course is named after a tree or plant that grows on the hole, including Magnolia, Pink Dogwood, Flowering Crab Apple and Azalea.

Perhaps most famous are the 11th, 12th and 13th holes which have become known as ‘Amen Corner’ for their infamous levels of difficulty. White Dogwood, the 11th hole, is a 505-yard par-4 that has instilled fear into most that have played it since the tee was moved back 15 yards several years ago. Traditional, challenging, sometimes controversial and always magnificent; The Augusta Course is a true jewel in the crown of golfing circuits. 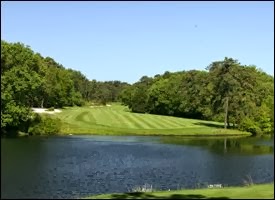 Pine Valley Golf Club is frequently lauded for it’s consistent level of challenge and conditioning on each hole, requiring thoughtful placement of the ball from tee to green.

Amongst its many accolades, Pine Valley has arguably the finest collection of par-threes and par-fives in the world, long priding itself as one of the toughest challenges in all of golf. In possession of a sense of mystery within golfing circles due to its private nature and difficulty to find, it nonetheless remains one of the most well-respected courses in the world.


If you are planning a trip to either St. Andrews, Augsuta National or to any other golf course abroad, Golfplan’s comprehensive insurance coverage can include overseas equipment hire if yours goes missing whilst in transit overseas.

Please tell me that youre going to keep this up! Its so good and so important. I cant wait to read more from you. I just feel like you know so much and know how to make people listen to what you have to say. This blog is just too cool to be missed. Great stuff, really. Please, PLEASE keep it up!
Junior girl golf apparel
Girl golf outfits