Learning all there is to the game of golf isn't easy - aside from attaining a repeatable swing, selecting the right golf clubs and cultivating proper etiquette, newbies need to understand how to count their shots and learn the basic rules of golf.

Golf for Beginners understands that some of this knowledge is provided by your instructor or through the internet but there are nuances to .the game that may or may not have come up.

Here are a few beginners (and not so newbie) questions answered:

Should I tip at the bag drop?
Whenever someone offers you a service, and you accept, it is customary to offer a tip. In this case, depending on your generosity, a dollar or two should suffice for basic service and more for those attendants who offer you special service.

Where do I bring the ticket that is given to me in the Clubhouse?
This receipt goes to the starter; it offers information such as how many players are in your group and at what tee box you report to as well as acknowledging that you paid, so keep it safe!

In what order do I play?
Golfers tee off in order from the back tees to the forward tees.
When all players are starting from the first tee and on the same tee box, it is customary to throw a tee up in the air to determine the initial order of play. During a round, on the fairways, whoever is farthest back from the green hits first.

Do I have to repair the mark I make on the fairways and greens?
Yes, ALWAYS! If you make a divot on the fairway, there is usually a sand/grass mixture located on the golf cart - shake it on the divot. If you see ball marks on the green, take out your ball mark repair tool and fix them for the next group of golfers and to keep the course in great shape...at the very least, repair your own mark.

How long should I take when getting a snack from the Clubhouse between the front and back 9?
You should limit your time at the snack bar to about 5 minutes - that should give you enough time to order something from the snack bar and visit the bathroom.

What do I do if I feel uncomfortable with the people with whom I have been paired?
Be polite. Play your own game. Enjoy the day and your surroundings.

Do I really need golf etiquette?
Even if you don't know how to swing a golf club, you will appear much more like a golfer than if you do all of the "no-no's" associated with bad golf manners. For example, don't step in someone's line and don't talk in a golfers' backswing - most golf etiquette rules are just common sense so use yours when out on the course.

If you don't know, ASK! Golfers are always willing to help bring another lover of the game into the fold.

Golf beginners questions are always welcomed in the comments section of our golf blog and on Twitter! Tag us @Golf4Beginners.

Is the TaylorMade M4 Twist Face Driver Right for You? 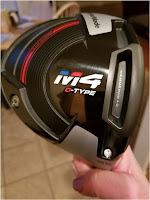 When Dustin Johnson won the Sentry Tournament of Champions in Kapalua, Hawaii this January, the TaylorMade M4 Twist Face driver was unveiled and golfers were immediately intrigued. After all, DJ hit 73% of fairways that week and almost made a hole-in-one on the on the 12th hole, a 433-yard par-4!

Just because D.J., a long-hitting PGA Tour pro, used Twist Face with success, does that mean this new golf club can also help lengthen and straighten your drives?

Golf for Beginners tested the new technology and our results are in!

Barry, a mid-handicapper, recently tested both the M3 and M4 drivers during a club fitting at Grande Dunes Golf Performance Center.

Barry decided it was time to replace his well worn TaylorMade R5 driver with a new club, hoping for improved distance and straighter drives. Eleven years is a long time to go without replacing clubs in your bag as cutting-edge technology really can improve an amateur's game.

For Barry, the M4 was the right choice during both quantitative golf club and swing analysis. Twist Face also felt light and comfortable in his hands as he took his swings; Barry said he gained yardage but the most important thing was accuracy and less "military-style" golf.

"In my opinion, the new TaylorMade M3 and M4 Twist Face golf clubs are the first new technology that really works for the amateur golfer.

Twist Face technology does what it was designed to do. It cannot change/fix a poor swing but it definitely tempers the poor result by keeping the ball in play more often.  This leads to lower scores which is something we all want. If you do connect with pure contact, the ball travels farther, picking up yardage you probably did not have with your current driver. Most of all, this driver helps you keep the ball in play which can definitely lower your score."

Barry continued, "The M3 has all kinds of adjustable weights which I don't think I would benefit from so I chose the M4D only after hitting many balls under the guidance of a trained club fitter. I now have the correct shaft and club head. In my opinion, the TaylorMade M4 Twist Face driver is the first new technology in many years that makes sense for the average golfer."

The "D" in the TaylorMade M4 "D" stands for "draw" and is designed to promote a draw for someone who is prone to slicing the ball. According to the TaylorMade website, "M4 D-Type features a two-tone crown cosmetic that has been altered to make the face angle appear more open, resulting in a more closed face at impact. Additionally, 41 grams of weight have been moved heel-ward to deliver draw bias." There is also a massive sweet spot on the club, a term TaylorMade called the "Hammerhead slot", which is supposed to improve distance and forgiveness.

When I play golf with Barry, I notice that he is still getting used to the new TaylorMade M4 D; when he hits the club on the sweet spot, the ball does fly farther and straighter than I have seen when he hit his TaylorMade R5 driver. Barry only plays one 18 hole round per week and, now that the warm weather is upon us, we are going out and playing nine holes during the week. I can see the improvement in his drives so I think the swing assessment and club fitting was right on track - TaylorMade M4 D Twist Face is the right club for him.

There is no better way to purchase a new golf club (or set) than through a club-fitting process. Take the time to be fit for your measurements (Barry's club shaft was shortened by about a half inch) and swing a few different golf clubs before going through the entire process.

Have you tried the TaylorMade M3 or M4 drivers? Tell us what you think in the comments section of this golf blog and on Twitter @Golf4Beginners.
Posted by Stacy Solomon at 4/18/2018 11:15:00 AM No comments: Links to this post

Another Masters Tournament in the annals of history, with another exciting four rounds and finale!

Top stories included Tiger Woods's return to major tournament action, Sergio Garcia's 13 on the 15th hole during round one at Augusta National (I don't think I have ever witnessed an octuple bogey by a PGA Tour pro), young guns charging and older golfers struggling and falling back into the mix.

Standouts who led a charge included Jordan Spieth who came close to having a record round (his bogey on the 18th hole stopped him) and Rickie Fowler who stood out not only for his terrific approach shots but for his orange pants! At the end of four grueling rounds, however, the last man standing was local golfer, Patrick Reed.

All in all, The Masters did not disappoint the fans.

Onto the winners' announcement of The Masters MMO Golf Pack Giveaway. As with every year, this is both a Twitter and Facebook giveaway and, this year, Golf for Beginners has chosen...

Congratulations to Vikki and her son, who will soon receive a Masters gift package. Thanks to all who entered! We look forward to our next giveaway!

A golfer with a strong mental focus on the golf course definitely has an advantage over his or her opponents - but, is this strength of mind enough needed to win The Masters? And, is the golfer on the PGA Tour with the strongest mind still Tiger Woods?

John Daly seems to think so; in a recent interview, The Lion mentioned about Tiger Woods, "I honestly think he has a great shot at winning the Masters this year. He’s got the strongest mind out there, his mental capacity’s like (Jack) Nicklaus  — he can overcome an Arnold Palmer’s army."

Watching the Arnold Palmer Invitational viewers could see Woods' resolve but, he did make one mental error during the final round which, in my opinion, cost him the tournament - pulling out his driver when a 3-wood better suited his situation; A similar mishap occurred during the latter part of the Valspar Championship.

That being said, Woods' resolve to make a comeback is strong and that might be enough to take home his fifth Green Jacket.

It isn't easy to win any major but The Masters' tournament, being the first major of the year and always held at the same venue, holds a mystique, unlike all others. According to a Golf State of Mind blog, in addition to a clear strategy at Augusta, pro golfers also need imagination and creativity, "an incredible work ethic and determination" and the ability "to think clearly in the pressure moments."

Woods is planning his attack on Augusta, from the clubs he will place in his bag to reviewing the greens and his old course notes - if any golfer is ready to take on Augusta during The Masters, it's Tiger Woods.

Bettors and sportsbooks are taking notice; Tiger Woods is one of the top five Masters favorites after consecutive top-five finishes with Woods currently at 12/1 odds, just behind Justin Thomas. Rory McIlroy is the current favorite to win at Augusta National.

Tiger Woods recently said, “when I fully put it together again, when I know my limits, then I think I’ll start winning golf tournaments again.” Think now is his time to win?

State your case for or against Tiger Woods in the comments section of this golf blog and on Twitter @Golf4Beginners.