Speaking Up on Social Media - Good or Bad for Golf?

Probably the most notable of Twitter golfers to rhapsody on the social media channel, Ian Poulter, recently stung back about his decision to stay out of this year's BMW PGA Championship based on a less-than-stellar track record at the event.

Stewart Cink, well-known for his use of Twitter, posts daily, most recently dishing about his bum rap at not playing in The Masters with a positive spin of vacationing in the Riviera Maya with his wife Lisa and returning home to watch the tournament on his brand, new 4K TV.

Do you think that player social media chat helps, or hurts golf? Do fans appreciate the openness and connectivity of their heroes, of reporters and golf's most outspoken characters or would they prefer a bit more ...detachment.

Fans must love the connectivity because guys like Cink pull in huge audiences. Cink currently has 1.12 million followers while Poulter has a whopping 1.87 million devotees but, is the intimacy good for the sport or is it better to just see the facade put on for the viewing audience?

Yes, pro golfers are active on Twitter and reporters and large business concerns are also quick to criticize, and make public, the sports' highs...and low. Golf Digest recently pointed out that ESPN Sports Business reporter Darren Rovell's comments about the state of the game might not be a "complete picture", noting that "the true picture is larger than 140 characters."

Before the influx of social connectivity, there was an air of mystique about the game, players, their lives, their thoughts of tournaments and of other tour players (unless a writer was told some juicy off-the-cuff tidbits). Fast forward to our technological society complete with smartphones dangling from almost everyone's pocket and the sky's the limit for many of these players as well as for their fans to see and to comment upon.

In the case of fallen number-one world golfer Tiger Woods. fans got to see Woods' personal debacle unfold ...the clean crispy hero turned into failure before our eyes, thanks, in part, to media and social media.

If not for his public outing, Tiger might have broken all records by now.

The media helped take the untouchable Tiger out of his winning rhythm...but, never fear! The PGA Tour announced on their website that Woods told Nicklaus he would be playing in the Memorial...websites add even more social fodder to the social world.


For Poulter, Dufner and others, the social connection gives them a chance to vent, helps their sponsors...and advertises to the public where to buy their books, clothing and more, further turning the machine.

Twitter seems to be the avenue of choice for celebrities, pro-sports stars including golfers, PGA Tour and LPGA to connect with audiences because of its quick and easy platform, which is why I have used this avenue in my examples.

Where does it all go from here? We as a people are moving forward and it looks as if social connectivity is here to stay, at least until the next big thing comes along. What is your opinion? Do you follow and interact with your favorite golfers on social media? Do you think we are living in an age of too much information?

Performing Under Pressure: Doing Your Best When It Matters Most #golf

When Jordan Spieth was asked on Bloomberg Business television network how he handled the intense Masters Tournament pressure putts he replied, "I just tried to have an imagination."

The art of visualization and getting your brain involved in the process of golf have been studied by psychologists, performance coaches and instructors because, as Bobby Jones once aptly stated, “Competitive golf is played mainly on a five-and-a-half-inch course...the space between your ears.” 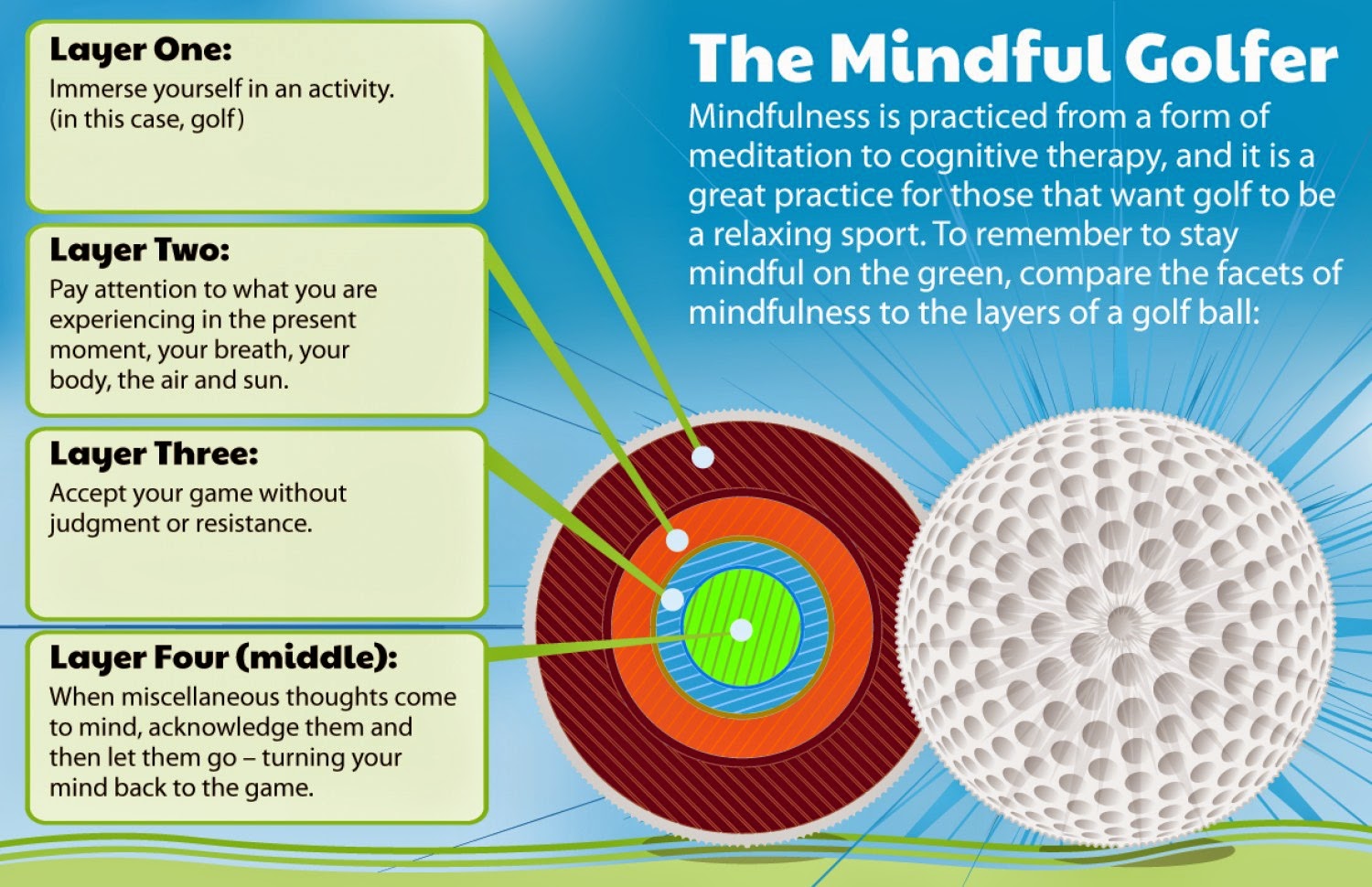 In order to learn how to perform at my highest level during a round of golf, I have been reading the book, "Performing Under Pressure: The Science of Doing Your Best When It Matters Most." Psychologist Hendrie Weisinger, Ph.D and performance coach JP Pawliw-Fry explain the debilitating effects that pressure has on your game and also provide strategies to overcome those stressful moments.

In one chapter, the writers discuss several solutions to pressure situations, one of which is to lessen the importance of the situation and another which is to focus on the mission.

Going back to the Spieth interview, here is how Jordan said he beat Augusta National:

"Ultimately, you really have to focus on the hole. You can't think of anything like looking at the scoreboard, don't think about it being for birdie, for par...it doesn't even matter. The point is you have to think about the read, get the speed and just pretend you're hitting another putt on the practice range."

Another pressure solution from the book which Spieth put into play? Recall you at your best.

Golfers usually make great shots at the practice range/putting green as there is all confidence and very little pressure. Try putting a few of those successful "makes" into your memory bank for your next game!

For the average golfer who jumps out of his car and bolts for the first tee, Spieth's tips are easier said than done. Instead, we read books, we watch the greatest golfers on the world's stage hoping to take away a bit of their magic for our next round. If you are interested in exploring the science behind rising to the occasion, Performing Under Pressure may help you do your best when it matters most.


How Do You Deal With Pressure on the Golf Course? Join the Conversation on Twitter @Golf4Beginners and let us know on this Golf for Beginners blog!

It's Masters Week and Golf for Beginners wants you to win incredible Official 2015 Masters Golf Merchandise! Last year we gave away great Masters souvenirs and this year we have more serious swag for you from the great folks at mmogolf.com.

Swag from The Masters? You bet! Read below for your chance to enter and WIN!

Many golf fans believe that spring officially arrives with The Masters and this year, with Tiger Woods possibly having his final major season, Rory McIlroy looking for a career grand-slam, Bubba Watson gearing up for Masters win number three and young guns like Spieth and Day chasing a major victory, this could surely be the most exciting event of the year.

The combination of azaleas in bloom at Augusta, memories of past wins, the turning over of the legendary Green Jacket and all the tradition that goes along with The Masters, makes this golf blogger want to give away Masters Merchandise. Most golf fans will not be attending but that doesn't mean you can't walk away without a souvenir!

Golf for Beginners knows you are gearing up to watch The Masters this week so we have arranged this special giveaway to two lucky readers of our golf blog. 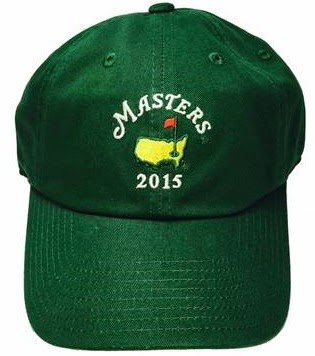 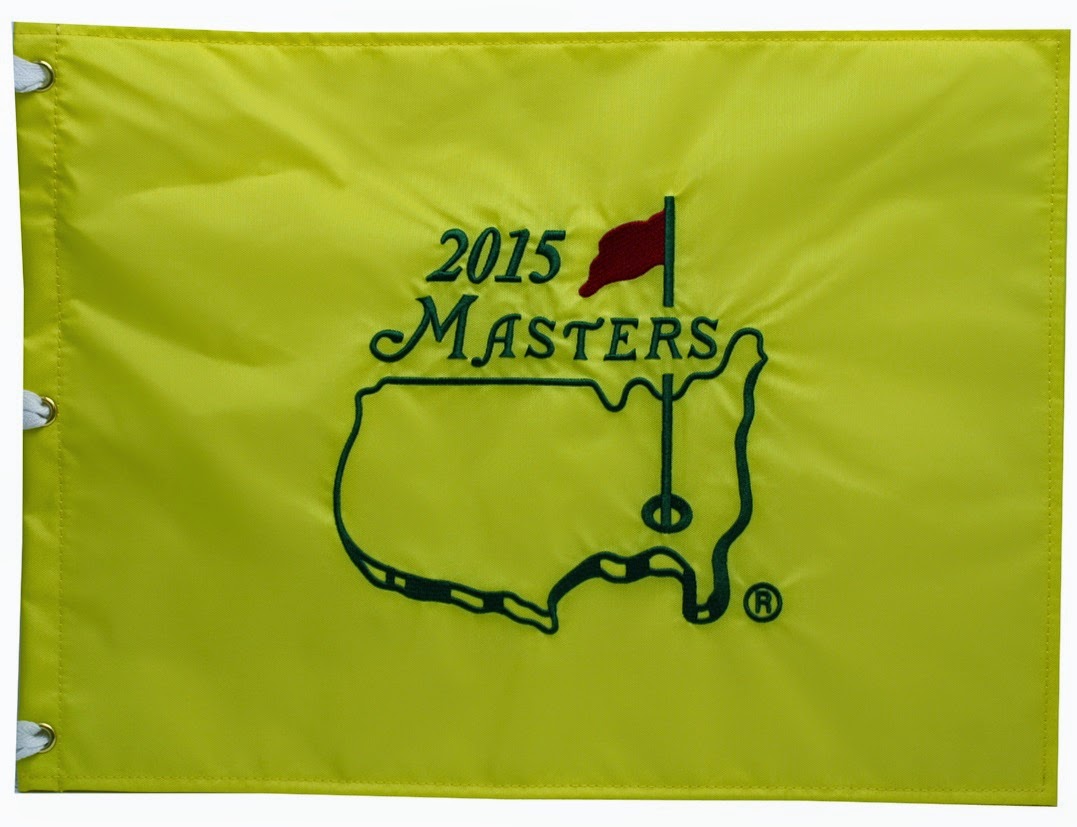 In my opinion, these are two of the most-sought-after items at The Masters!

What do you have to do in order to try and win this Officially Incredibly Cool Masters Merchandise?

Here it comes... it's the Official Giveaway Rules!

This is a Twitter-based giveaway but we will also watch for these hashtags on Facebook and Google Plus so...

Follow @Golf4Beginners on Twitter and send us a tweet with the hashtag #MastersHat or #MastersPinFlag telling us why you want to win either of those prizes.

Updates must include entrants' @username mention to @Golf4Beginners in addition to either #MastersHat or #MastersPinFlag to be considered an entry.

One Masters green slouch hat and one Masters pin flag will be given away by Golf for Beginners blog.

Prizes contributed by MMOGolf.com (see below).

One winner of men's hat and a different winner of pin flag - winners will be selected by me, Stacy Solomon, so please try and make nice yet opinionated Masters mentions as I will be reading and responding to all comments!

Only one entry per person but feel free to RETWEET this great giveaway and tell your friends.

Winners will be announced Monday after The Masters - no, Hootie and the Blowfish will not be playing at the announcement!

What else can you do to increase your chances?

...and Like MMO Golf on Facebook, suppliers of great Masters Merchandise and the site responsible for this giveaway.

What Will It Take to Win The Masters? #golf

Poor performances in previous golf events, nagging physical ailments and a fear that Augusta's bite will be ferocious are just a few of the elements in play before The Masters plays out next week. So, we ask our readers...what will it take to win The 2015 Masters Tournament...mental supremacy...physical toughness?

After a recent practice round, Tiger Woods is still undecided about whether or not he will attend The Masters; the internet is abuzz...should he? Nagging doubts, MC's and loss of touch are enough to make the back hurt even more!

While Tiger Woods is unsure of his game and physical condition, contenders like Jason Day are now using positive self-talk to gear up for the first major of the year.

Brimming with confidence, Day mentioned that his failures have made him stronger. Although there is, and will always be, pressure, the Aussie is learning how to handle it, focusing on diet, short game and an improved positive outlook.

Rory McIlroy, a 2015 Masters favorite, is looking forward to an elusive career grand-slam win next week, in spite of the albatross of a 2011 loss at the event...we'll not go into details here as golf fans must surely remember that horrifying collapse.

The good news for McIlroy is that, despite throwing a golf club into the water at Doral and negative self talk about his putting woes, he has mental pictures of fantastic finishes at the two final 2014 major events. Calling upon mental images of success will be needed next week although McIlroy will also need putting mastery in order to succeed - the physical act of rolling putts into the cup on Augusta greens is just as important. 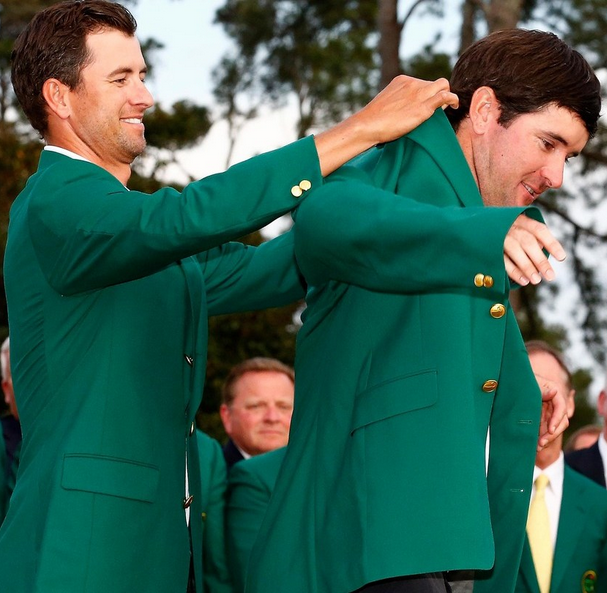 "They're the toughest we face all year," McIlroy mentioned to Golf.com. "I don't know if it's intimidation; it's just you gotta think about them more. It does play on your mind more than other courses."

At the beginning of this golf blog we asked, "What will it take to win the Masters Tournament" and now we want to hear your answers.

Golf Digest places the green jacket on the golfer who can accurately bomb a great drive while finessing a putt into the cup. a man who remains in great physical shape while having a positive mental outlook....reads like a description of defending champion Bubba Watson?

Who is your pick to win The Masters and why? Voice your opinion on this Golf for Beginners blog and on Twitter @Golf4Beginners with hashtag #MastersWinner!