Two of the world’s leading golfers landed in Rio for the HSBC LPGA Brasil Cup with a simple message for the sport: “Next Stop: Olympics - Let’s grab this opportunity with both hands”, Tim Maitland reports.

World number two Suzann Pettersen and number four Cristie Kerr believe Rio 2016 represents a once in a lifetime chance for the sport to establish itself in a country where less than one in every eight thousand people currently play the game.

Less than a week after battling it out in the final of the Sybase Match Play Championship in New Jersey, Pettersen and Kerr sat on lounge chairs sipping glasses of fruit juice on Botafogo Beach, hoping it would be the last occasion they will have time to enjoy Rio de Janeiro’s sun-kissed sand.

“We’ve got five years before we return for the Olympics in Rio and the HSBC LPGA Brasil Cup is the one foundation stone our sport has to build on,” said Pettersen, in the build up to this weekend’s two-day, limited-field event at the Itanhanga Golf Club.

“We can’t miss this opportunity!” declared the Norwegian, who was one of the team that successfully argued the case for golf’s return to the IOC two years ago.

“Sitting in the shadow of Sugarloaf Mountain is spectacular and Rio is stunning, but if we’re going to grasp the Olympic opportunity we have to continue to grow here. We’ve got the best field of women’s golfers Brazil has ever seen, so this week is already a success but we need to keep getting bigger,” added Kerr, aware that golf needs a bigger base than the 25,000 players among the estimated 200 million people who make up the world’s fifth most populous country and a nation that boasts one of the fastest-growing major economies in the world.

Kerr and Pettersen also spent time swapping tips on bunker play with children from the R&A-funded Japeri Project, a community programme that is developing over 100 young golfers from one of the poorer areas of the city.

“Both Brazil and golf needs the kind of top-and-bottom approach that we have traditionally taken with our golf sponsorships in Asia and around the rest of the world. The sport needs growth in number of participants and it needs to spread demographically,” said Giles Morgan, HSBC Group Head of Sponsorship.

“At the top end, the sport needs to grow its profile and to build the profile of the top players. Improving the quality of the leading international tournament in Brazil is one step and the steps are only going to get bigger the closer golf gets to the 2016 Olympics, especially with the rate Brazil’s economy is growing.” 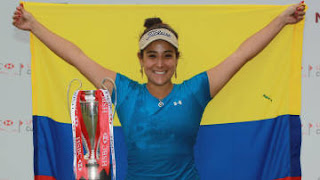 nice article sir
thanks for information ..