How Phil Mickelson Won at the 2005 FBR Open


First of all, CONGRATULATIONS to Phil Mickelson
on his win at the 2005 FBR Open!


Next, the question arises, "Just how did Phil do it?"

He is usually an aggressive player, "going for the green" whenever he thinks he can make it, regardless of the consequences. This makes him an exciting player to watch, but also makes him prone to failure and losses, with large leads slipping away by the end of the tournament.


Hitting the fairway was essential at the Phoenix CC, and proved to be an easy task for Mickelson early on in the tournament.

But, on Sunday, with the pressure running high, Phil missed many fairways...but EXCITED his fans with brilliant recovery shots (the one through the trees, for example should be a top ten pick for 2005!).


Through all of the drama, Mickelson never gave up his lead...the mark of a true champion.
The local crowd, Phil's fan base, cheered him on as if he were a rock star, especially at the 16th par 3, the "amphitheater setting". Hit the green on this hole, the crowd cheers wildly...miss and you get booed off the stage! Mickelson did not disappoint and went on to birdie the 18th and claim an exciting 5 shot victory.
I am probably one of Mickelson's most vocal, adoring fans (a lefty rooting for Lefty) and have watched him faithfully for years. With the recent switch to Callaway and a terrific coach by his side, Phil is now concentrating on his mental game. When he gets into trouble, instead of going for the green, he now finds a way to get out of trouble FIRST, then gets SAFELY onto the green.


The beginner golfer can learn quite a bit from Mickelson's change of mental attitude. It is important to realize when it is safe to go for the green or when to lay up on a par 4 (eg) then chip for birdie and maybe save par...that IS the game, you know! This "safe" thinking will save many strokes on the course for the beginner golfer (and for golfers of all levels...look what it did for Mickelson!).


And, getting back to Mickelson's change of equipment...is it necessary? Did it improve his game? Sure, his income has gone up dramatically from the switch. Callaway is a solid brand name, with Mickelson's clubs fine tuned just for him. Phil says that the golf clubs have helped his game, but a great golfer like Phil could probably use MY left-handed golf clubs and hit 300 yard drives, pitch to perfection and hole most putts!

For the average golfer, it is important to have golf clubs measured for you by a qualified clubmaker. "Try before you buy" will also give you the best feel for the golf club and determine which club feels the best in your fingertips, the proper weight, grip, etc.


However, as Phil and the world can see, more than a change in his equipment or mental attitude on the course, the best medicine for Mickelson's game is returning at the end of a tournament to his lovely wife, Amy and his beautiful children.


It is also nice to see that Phil cares so deeply about our troops and their families...Thanks Phil...make alot of birdies and eagles this year!

Tiger and Annika Rock the Tour! 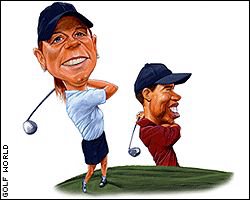 As per my March 3rd Weekly Golf Blog, I chose to watch the final round of golf at Doral.
I usually root for the underdog as so many of us golfers do, and was surprised that Mickelson didn't win! His mental game must be alot stronger, because he won the last two PGA Tour events. But, when it comes to Tiger lurking in the shadows, I guess Phil needs to push his mental game even further.

Don't worry Phil, the majors haven't even begun and you really are ready for them! I suspect that you'll win at least one major this season, Phil, but I'd like to make a wager that you might even come away with two main events! And, please don't forget that you won the Grand Slam of Golf last year which pitted you against the other PGA major winners...remember the 59!!! And, never forget that 60 to start off this season!

Also, congrats to Annika! Sorenstam really knows how to put the pressure on when the going gets tough! Another person who had trouble with her mental game last week was Lorena Ochoa. Perhaps the pressure of Mexico was upon her shoulders. That's okay, Lorena! Last season you reached 3rd place on the LPGA Money List. That's no small feat! I'm rooting for you to win at the Kraft Nabisco Major in April!

And, to finish off, Barry and I had a nice weekend in Atlantic City this weekend!

Phil, Tiger and Vijay, Lorena - Who Should I Watch This Weekend?

With 11 of the top twelve players headlining at Doral, it seems more like a parade than an actual event! Only Ernie El's is missing in the lineup as he will be at the Dubai Desert Classic this week. And that's too bad, because I think Els is a joy to watch. His swing is so slow and has such good tempo that I really miss watching him! So, I will make sure that I catch the Dubai Classic this week at well.

This is going to be a big week in golf. The LPGA is going to be in Mexico for it's first tournament there in 30 years! Petite Lorena Ochoa is playing against Annika, Karrie Webb and most of the LPGA's top guns. Lorena has made it her goal this season to be in first place on the money list for 2005. She's gunning for Annika by hitting more fairways and greens in regulation. That's no easy task, but, with Mexico cheering for her, and American fans watching, she just might wind up at the top of the leaderboard.
I'm heading out this weekend to Atlantic City to celebrate my husband's birthday. I already got him a gift, a brand new Taylor Made R5 Driver...he's going to write his blog about the search - go to: http://www.justablog.myblogsite.com.
Of course this might take him a few days to write. The weather is cold and snowy here in the northeast, so practice is at a minimum...AND, we'll be in AC for the weekend!