Have You Ever Competed and Won a Team #Golf Tournament?

It is certainly an exciting time for NCAA golf, isn't it?

Teams have recently been selected for the 2014 DI Men's Golf Championships and regionals began on May 8th for nine Pac-12 women's golf teams with the DII Women's Championships being held this week. These are the top annual competitions in collegiate golf and they are well-represented.

I have to say that golf is definitely a growing and thriving sport, wouldn't you?

It is inspiring to see these young athletes participating in the sport that lasts a lifetime. Next year, with the addition of match play to the women's lineup (already part of the men's lineup) watching teams go head-to-head “brings everybody together pulling for each other,” said competitor Rocio Sanchez Lobato. Announcements and more visibility than ever will come from The Golf Channel, further proof that there is a place on TV for Team Golf!

Team play also makes viewers feel as if they are watching well-known events like the Ryder Cup or the Solheim Cup - individuals banding together gives the audience reason to cheer and a sense of pride.

Team pride - from the youngest competitors to the top players in the world - believe in the saying, "One for all and all for one!" Just ask Team Asia's Captain Thongchai Jaidee who stated, "Now that we are in the team, we are all fighting for our pride and honor and it is important for Asia to show the golfing world that we belong on the world stage by producing our best golf and win the EurAsia Cup."

Yes, the coveted trophy...aside from pride it's one of the main reasons these Teams go out onto the fairways and give it their all! If you were ever a member of a Team, you will probably fill with exuberance at just at the thought of being a member of a golf team.

Have you ever competed on a golf team and won the trophy with your mates?

If so, Golf for Beginners wants you to know about a great contest called "My Team Rocks!" held by Crown Awards, America's Largest Trophy Supplier.

Teams usually are thrilled to have their picture taken with their coveted award - it's the light at the end of the tunnel-vision geared at the win. Here is your chance to open the photo album and pull out the picture of that win you shared with your teammates! Crown Awards wants to see that celebration moment, that feeling of elation and pride that just can't be described in words.

Enter via the Crown Awards Facebook page for one chance to win, then upload your picture and that's it! You are entered to win Crown bucks.

Since this is also a voting contest, if your picture gets the most votes on Facebook, you will also have the possibility of winning again! You should probably let your teammates who shared in the glory in on your contest entry so that they, too, can vote for their picture! Don't want to enter via Facebook? You can get an entry by uploading your photo to Twitter with the hashtag #MyTeamRocksTrophies.

Here is the link to the official rules of the Crown Awards MyTeamROCKS Contest. 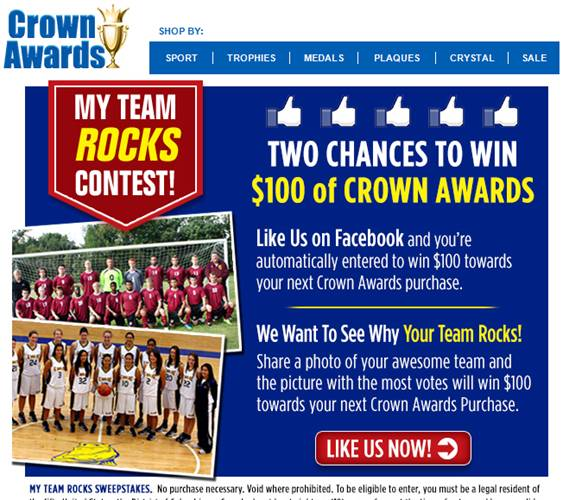 I would also love to see and retweet your team pictures too ... I love trophies and happy faces ...so it would be nice if you could add @Golf4Beginners to your tweet!

"T.E.A.M = Together Everyone Achieves More."

I simply wanted to appreciate you yet again. I am not sure what I would have used without the type of information shared by you directly on such a subject. This was a very alarming setting in my view, however , spending time with a skilled mode you handled that made me to cry for fulfillment. I am just happy for this information and thus hope you are aware of a great job you are doing teaching most people using a blog. I know that you’ve never got to know all of us.
Girl golf clothes
Girl golf apparel