The Most Dreaded Shot in Golf and How to Fix It

The 2019 British Open served up a lot of emotions, from Shane Lowry admitting to being 'nervous and scared' to Henrik Stenson breaking a golf club over his knee after shanking his approach shot on the 17th hole.

It was Stenson's shank that received the most attention through video clips across the internet and one which can be the most frustrating shot in golf. There is also a plethora of conversation about it because it is so widespread. In this Golf for Beginners blog, we discuss what a shank is and how to fix it.


A shank from Henrik Stenson and a broken iron over the leg. pic.twitter.com/qEQd7PXYmw
— By The Flagstick (@ByTheFlagstick) July 21, 2019

What is a shank? It's, quite possibly the most dreaded shot in golf - once you "catch" the shanks, it's hard to get rid of them!

Basically, a shank is when the golf ball hits the hosel or heel of your golf club. The ball veers sharply to the right for the right-handed golfer. This differs greatly from a slice as the ball comes off the clubface with a slice as opposed to the hosel of the club.

The great instructor Butch Harmon states, "With the clubhead swinging out to in and the face closing, you risk hitting off the hosel."

How do you get rid of the shanks? David Leadbetter says that you should take a break from the golf course but, just in case you are in the middle of your round, he also says to "make sure you’re standing tall with your chest up during the swing, don’t hold the club too tightly, and make sure your weight isn’t sneaking up towards your toes."


READ Drills for getting rid of the shanks

Swing easy, have fun and don't worry when you are playing golf. "Relax, Review, Refocus"!

How can clearing the cobwebs in your mental game make beginners and amateurs into better golfers? 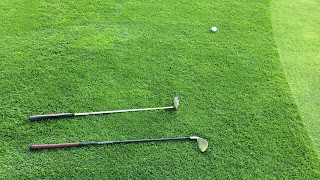 After a bogey-free weekend, Frittelli discussed how, for the past several months, sports psychologist Jay Brunza has changed his game.

"The plan for this week was just to be creative and have fun," mentioned Frittelli during his post-tournament interview. “Mentality clarity was the difference this week,” Frittelli said.

Although the exact communications between Jay Brunza and Frittelli remain confidential, Brunza did state that positive encouragement was a focus of their messages.

Mental clarity is easier said than accomplished but think of the song lyrics by En Vogue, "Free your mind and the rest will follow" and you are on the right track.

According to an article in The Independent, Brunza, a retired U.S. Navy officer and caddie/sports psychologist to an amateur Tiger Woods, said this about the junior Woods,

"...the process that followed was to teach him to deal with critical situations by emotionally detaching himself from them, while at the same time being completely immersed mentally in the challenge of the moment. With the inhibition of the fear of the moment removed, Woods could respond to the best of his burgeoning physical ability."   [paraphrased, Paul Trow]

Jay Brunza is also credited by several other tour players (Charlie Howell, for example) for his unique mental game strategy.

"You don’t focus on win or else," mentioned Frittelli in his post-round interview. Winning is a process. An easy thought to remember would be Brunza's catchphrase, "Relax, Review, Refocus".

A few more mental golf tips from the superstar sports psychologist are to...

Focus on a “pre-shot routine” in the pursuit of “peak performance” and "letting everything go, all the distractions, before playing a shot.”

The Trick to Getting Out of Greenside Bunkers

When you play in a lot of bunkers like the PGA Tour pros do each week, you get a feel as to how to always get out of it and snug the golf ball close to the hole. This isn't necessarily true for amateurs who sometimes take two, three, or more attempts to get up and out of the bunkers and onto the green. 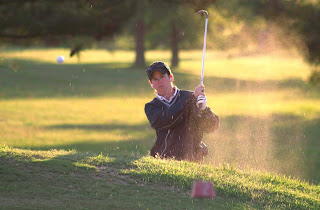 What tricks do you need to be more consistent out of greenside bunkers? We're here to help you!

The key for amateurs is to understand that first you have to get out of the sand and, once you accomplish that feat on a regular basis, you can learn how to get closer to the hole.

Recent news recaps how Pat Perez, during the 2nd round of the 3M, took a bunker shot and landed 17 yards to the green and then two-putted for bogey. Michael Thompson's greenside bunker attempt landed 28 yards from the pin with similar results. The one thing that both golfers have in common is that they get out of trouble and get onto the putting surface in one shot.


Golf Tips for Getting Out of Greenside Bunkers

FEEL THE SAND
Did you know...professional golfers dig their feet into the sand in bunkers to feel how much and how hard, or loose/separated, the sand is - not just for stability!

OPEN THE FACE
Butch Harmon's basic tip for getting out of the sand involves using the bounce of the sand wedge to get out in one shot. "Holding your sand wedge in front of you, turn the face open about 20 degrees, then take your grip." (This article is terrific and, since Mr. Harmon is one of the best in the business, I believe you should read it all the way through...editor notes.)

BALL FORWARD
Weight forward, shaft straight up and down, hit the sand 2-3 inches behind the ball and don't cut across the golf ball.

Read: How to Get Out of Hard Sand Bunkers

Sounds simple and it is! No need to overcomplicate this lesson or lose your cool. Try out these directions during practice and you should get somewhere up and out of the greenside bunker every time. Thanks Butch!
Posted by Stacy Solomon at 7/11/2019 08:56:00 AM No comments: Links to this post

Labels: golf for beginners, how to get out of a greenside bunker, tricks to getting out of golf bunkers
Newer Posts Older Posts Home
Subscribe to: Posts (Atom)