Can You Play Better Golf with Single Length Irons in Your Bag?

Much internet chatter lately has been on the subject of playing golf with single length irons. What does it mean to have a single length iron set, what type of player will benefit most from a switch to this type of set and should you go out and try them?


What it means to have a set of Single Length Irons in your golf bag: 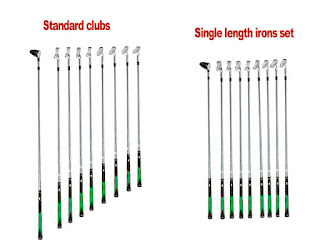 The simple answer is that the shafts of the entire set of irons are built to one specific length but with changes in the head and more.

Golfwrx has conveniently put all of this information into an article but, unless you are an amateur who enjoys reading the difference between distance gapping and head weights as well as the other "small nuances involved to golfers", suffice it to say on this golf blog that a group of amateur golfers "just like you" were given a set of single length irons to compare to a standard set with their results posted on Golf.com.

What was the outcome of the test?

"There was no clear 'winner.' A case can be made for standard-length and single-length clubs and who will be using them.

Some standard set shorter irons were easier to play but the single length irons seemed to be a better choice for golf beginners and high handicappers who learn one setup when everything in the basics of the swing seem harder to fathom. Golfers, in general, may find it a challenge to get used to new, single length irons.


Can You Change YOUR Golf Irons Into Single Length Clubs?

The simple answer is No because of the difficulty involved in the changeover.

According to pro golfer Jaacob Bowden who wrote an article on SwingmanGolf.com, head weights differ so you would have to "grind off a bunch of weight from the other higher-lofted clubs to get them all as light as the 4-iron head." Also, the lie angles and balance points of the clubs are also different.

Every year, manufacturers create new products for a hungry public with disposable income.

You can only change the heads so many times, change the appearance, shaft weights, colors...you name it...but how many times are you going to change over your clubs? At $750 or so per set, that can get expensive if you're not Tiger Woods. As for the single length irons, I believe these clubs could work well for beginners who play but are having difficulties with how to adjust their setup or ball position to the different iron lengths in their bag.

According to "Old Timer" on the GolfWrx forum, "I have friends that have tried this.  It does not work.  This idea usually appeals to new golfers, don't get caught up in this scam, it has no validity.

"This one club length came from an iron that came out many years ago.  It was an iron that
has an adjustable blade, 1 - PW, and it is still sold today.  Look in the back of a golf
magazine I think they still advertise.  Don't buy either of these unless you never want
to shoot under 115."

Golf pro Lanny Wadkins is said to have concurred, calling these irons a gimmick."If it really worked, legit players like Tiger Woods and Jack Nicklaus would have done it years ago"

Jaacob Bowden's experience was a positive one, "4 months after I bought them, I played in the 2007 Long Beach Open and I shot my first tournament round of golf in the 60s."

I've been hitting a set of Pinhawk Single Length clubs for over a year now and I don't think that I'll ever go back to a traditional set!